Several methods of contraception are available. The method you choose will depend on your general health, lifestyle and relationships. Contraceptives available include physical barriers and devices, hormonal (oral, implant and injectable) methods, sterilisation, emergency and ‘natural’ methods. 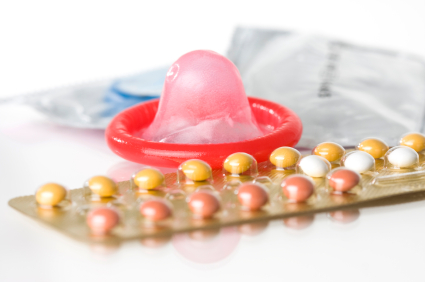 Physical barrier methods
Barrier methods of contraception stop sperm from getting into the womb (uterus). Options include male condom, Female condom and Diaphragm.

Male condom
This is a latex (or polyurethane) sheath that covers the erect penis and prevents semen entering the vagina. This is an effective form of contraception when used correctly.
Female condom
This is a loose polyurethane sheath with a flexible ring at each end that sits in the vagina and collects semen. It can be inserted several hours before intercourse and is stronger than the male latex condom, though insertion and use may take some practice.

Diaphragm
This is a soft, shallow rubber dome that fits in the vagina, covers the cervix and stops sperm from entering the uterus. The diaphragm must stay in place for at least six hours after intercourse and must be fitted and positioned correctly. Diaphragms must be fitted by a suitably trained doctor or nurse.

Intrauterine devices (IUD)
An IUD, sometimes known as a coil, is a small plastic device with added copper or hormones (Mirena) which is inserted into your uterus by a doctor. It can stay in the uterus for five to ten years (depending on the type used) and can easily be removed earlier if you want to become pregnant or are having problems.

Combined pill
This is made up of synthetic forms of the hormones oestrogen and progesterone. The combined pill prevents ovulation, thickens cervical mucus to make it harder for sperm to enter the uterus and changes the lining of the uterus to make it less suitable for a fertilised egg to stick.

Vaginal ring
This contains similar hormones to the combined pill and works in the same way. A ‘one size fits all’ ring is inserted into the vagina and stays in place for three weeks. During that time, it slowly releases hormones that pass from the vagina into the bloodstream. It’s then removed and a new ring is inserted a week later.

Mini pill
This contains only a synthetic form of the hormone progesterone. It makes the cervical mucus thicker, which prevents sperm from entering the uterus. The mini pill must be taken every day at the same time and is not as effective as the combined pill. It’s usually suitable for women who either experience side effects from oestrogen or shouldn’t take it for health reasons.

Implanon
This is a hormone implant that is inserted under the skin at the inner side of the upper arm. It contains etonogestrel, a progesterone-like hormone that prevents ovulation and hinders sperm from entering the cervix by changing cervical mucus. The device is inserted by a doctor under local anaesthetic.

DPMA injections (Depo-Provera/Depo-Ralovera)
These are long-acting (12 to 14 weeks) injectable contraceptives containing the hormone progestogen. They prevent ovulation, block sperm by thickening the mucus made by the cervix and cause changes in the lining of the uterus to make it unsuitable for a fertilised egg to stick. DPMA injections are highly effective and provide a very private method of contraception.

Vasectomy
This involves blocking sperm by cutting the tubes they pass through from the testes to the penis.

Natural methods
Natural family planning is based on an understanding of the menstrual cycle. Methods include monitoring cervical mucus changes, body temperature changes and rhythm or cycle calculations to help determine when a woman is most likely to be fertile each month.

When you book online, please do not come to our physical address. The receptionist or doctor will ring you at your appointment time and organise your phone consultation. Due to the current unpredicted situation expect your phone call one hour before or after your booked time.